The Jefferson Trust Annual Cycle is open for the 2022-23 academic year!

Annual Cycle proposals come from students, faculty and staff for a variety of new programs and projects. They are typically intended for requests with budgets ranging from $10,000 to over $300,000, but there are no minimums. Maximums vary based on available funds.

Every Annual Cycle grant starts with a letter of inquiry (LOI), which is an opportunity to simply explain the idea; requests are reviewed on a rolling basis. Early LOI entries (before September 15) have the opportunity for edits and resubmission based on the Director of Grants’ feedback. From there, selected LOIs move to the proposal stage. After further review, a final batch moves forward for in-person pitches to the full Board of Trustees. Review the Annual Cycle timeline below for more information:

We encourage you to plan ahead, learn more on our Grant Seekers page, and contact our Director of Grants, Amy Bonner, to talk through your innovative idea.

Many grant projects have been busy over the summer! From conducting field tests to hosting seminars, to preparing for future events, check out some incredible Jefferson Trust projects highlighted in the news:

An initiative from the UVA Equity Center and a 2022 annual grant recipient, Starr Hill Pathways brought middle-school students to Grounds for a three-week program to learn about the college experience and engage with a university. Check out their experiences in this UVA Today article, CBS19 feature, and Daily Progress article.

A 2022 flash grant recipient, “Chaos to Chaos: Documenting Afghan Women,” was recently highlighted on CBS19 News for their work to build community and share the stories of Afghan women in the local community.

The UVA Solar Car team raced a custom solar-powered electric vehicle at the Formula Sun Grand Prix in Topeka, Kansas this summer. Learn about their preparations and building their car since receiving a Trust grant in 2017 in this Cav Daily article.

Since their 2018 grant, read about the growth and impact of Hoos Connected in this UVA Today feature. The grant funds a one-credit class lasting a single semester that teaches healthy relationship-building skills in small groups of first-year, second-year and transfer students.

“Madayin: Eight Decades of Aboriginal Australian Bark Painting from Yirrkala” is the first major exhibition of Aboriginal Australian bark paintings to tour the U.S. It opens in September 2022 at the Hood Museum. Kluge-Ruhe received a Trust grant in 2019 to help produce the accompanying catalog, a 352-page piece in both Yolngu Matha and English (which is the first ever international touring exhibition catalog in an Australian language). Read more about the significance of this exhibition.

The Jefferson Trust was formed because there was a need for unrestricted funds to support new projects and programs. That need has existed since the University’s founding, and it still exists today. The wide menu of fundraising priorities and the time upper administration devotes to fundraising would indicate the truth of that statement.

With all this time spent on fulfilling ‘the need,’ how does a fundraiser know if the idea they’re pitching resonates with donors? A single ‘yes’ can do it, but it would take several instances of ‘no’ to realize a change needs to be made. Time-constrained campaigns put a shot clock on moving the idea forward, and a year or two of hearing ‘no’ is too long.

In January 2022, Risa Goluboff, Dean of the UVA School of Law, pitched her vision to the Trustees and quickly received her ‘yes.’ The Roadmap Scholars Initiative is a two-year program designed to expose college juniors and seniors to the law, law school and the legal profession, and to help them become competitive applicants to the nation’s top law schools.

The Trustees loved the idea and granted $200,000 in seed funding to help start the program. Not only did this grant help jump-start the program, but the full board, which includes seven Law School alumni, are also strong supporters and advocates for the initiative’s growth.

This same jump-start effect can be even more helpful for a new dean, director or vice president. There’s a lot of pressure on new administrators to simultaneously thank the donors who have given previously, while pivoting to new priorities, and doing so within the campaign timeline.

Nicole Thorne Jenkins, the John A. Griffin Dean of the McIntire School of Commerce, saw the Trust’s value early on and proposed the Side Hustle program. The program — designed to be taken anywhere, anytime — offers one-half-credit classes that deliver modern business content and skills to students who may be interested in starting a new business, growing a network, honing a brand, or learning how ‘Name, Image, and Likeness’ works for college athletes.

This grant will provide seed funding and proof of concept programming and help the school better showcase the dean’s vision.

These examples have both been on the ‘yes’ side, what happens when the Trust says ‘no’?  It can still be a positive.  A ‘no’ from the Trust gives the grant seeker a chance to revise the pitch, revise the project, or go back to the drawing board.

The Trust grant-making process is a positive opportunity to move an idea forward faster. It yields great ideas and great outcomes that advance UVA. 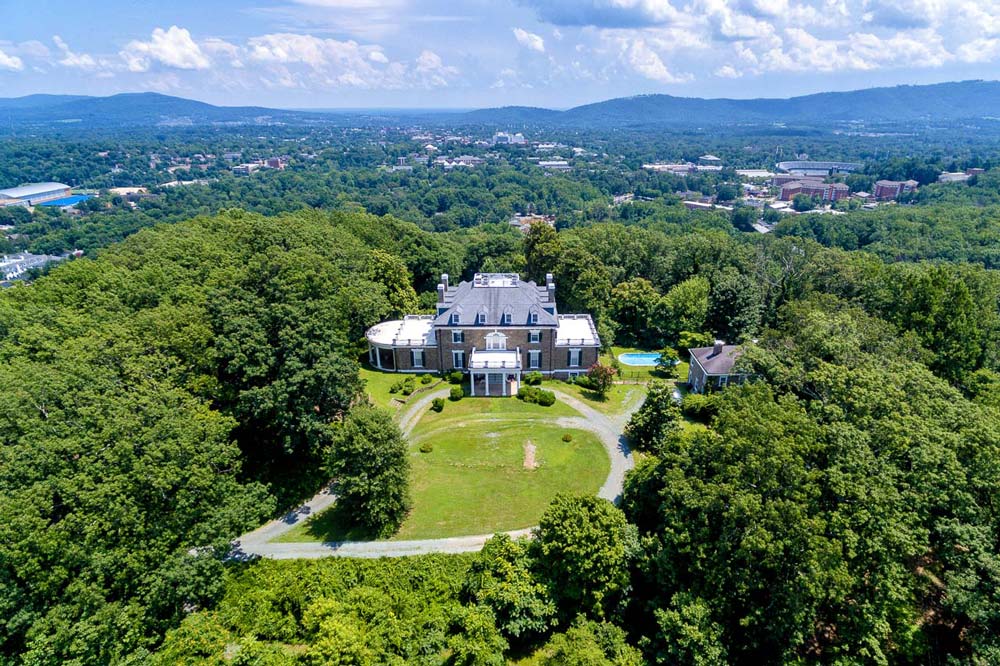 While on Grounds, you may have looked to the west and seen a hill-top house reminiscent of Monticello. But isn’t Monticello east of Grounds? Yes, it is.

What you have seen is the Lewis Mountain House, also known as Onteora. Built in 1909, it is on the National Register of Historic Places and its 42 acres were originally landscape-designed by the renowned Warren H. Manning.

What led you to purchase the property?

We saw this as an opportunity to rescue a Charlottesville icon and to transform it from a neglected, mysterious place into a spectacular destination that more people would be able to use and enjoy. Our goal is to preserve the historic character of the property, revitalize the landscaping, and make it more accessible, usable, and enjoyable.

How will you use it?

Initially, it will be used for our own use as we strive to get the house and grounds into respectable condition. In addition to the main house, there is a guest house, and the original carriage house which we plan to rent for this upcoming school year. We are exploring with the county how we can make the main house and the almost 43-acre property, described in 1965 as a mountaintop park, more usable and purposeful. We have met with UVA architects and will be researching the property more to get a better understanding of its past and its potential for the future.

When will you receive your first guests/ customers?

Our youngest daughter, Anna-Marie (Col ’08), was recently married here in Charlottesville. We managed to clear out enough rooms, repaint and clean them to have family guests stay in 8 of the 11 bedrooms in the main house. During most of July we are staying here along with hosting 5 guest artists, who are in the summer performances of The Charlottesville Opera.

What interesting feature can you share about the house?

There are numerous interesting features in the house: huge pocket doors, multiple light sconces in every room, 14-foot-high ceilings, huge marble fireplace mantles, original silk wall coverings, original chandeliers and more. Of course, what stands out most are the views in every direction — from the very visible four-columned portico looking east towards UVA and Monticello, looking south from the original pool area towards Nelson County, from the ‘front’ entrance looking west towards Birdwood and the Blue Ridge Mountains, and from the north portico toward the airport and the Southwest Mountains. We were able to see Fourth of July fireworks in every direction!

The Lewis Mountain House is a gem right in the heart of UVA, Charlottesville and Albemarle County and we look forward to seeing what the next chapter holds in its long history.